WWF’s sturgeon conservation expert Jutta Jahrl has recently come back from a visit to Russia where she accompanied a German television researching sturgeon poaching. We asked her to share her stories and sturgeon insights from the trip.

Tell us about your trip to Russia

I was travelling with a German television team working on a documentary on sturgeon poaching and illegal caviar trade. In Russia, there is a long tradition of sturgeon fishing and consumption of caviar and sturgeon meat. We started our research in the region of Astrakhan, a global stronghold of sturgeons and the caviar industry. 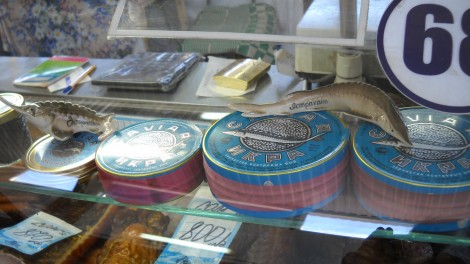 At first, I had the impression that the situation was similar to the one at the lower Danube, but in Russia the situation is a lot worse. Institutions say that poaching and illegal trade are under control and that aquaculture covers the demand, but if you take a closer look you see that these activities continue. On the fish market in Astrakhan, for example, caviar from wild sturgeons was offered quite freely, and our driver told us he would call a poacher friend. We went to meet him in front of a garage. He opened the trunk of his old Lada and showed us his illegal hook lines and two tins of caviar from the sturgeon he had poached the night before. 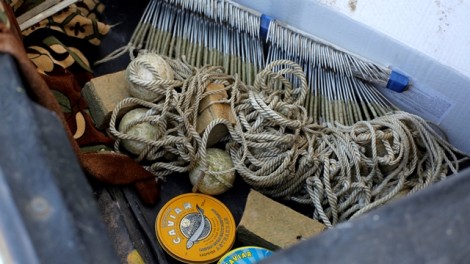 The hook lines for sturgeon fishing are called “peremyot” in Russian

He told us he had been a poacher for many years and he had never been controlled. He poaches three times a week during the season, but this is not his main source of income. He makes money as a driver. He said he poaches instead of playing cards and only sells to friends. But he was not rich. So you can see that poachers do not get rich – it is the people further up the chain.

Does he feel bad about what he does?

He was aware sturgeons are endangered, but he did not mind. He sees that there are less and less sturgeons though. 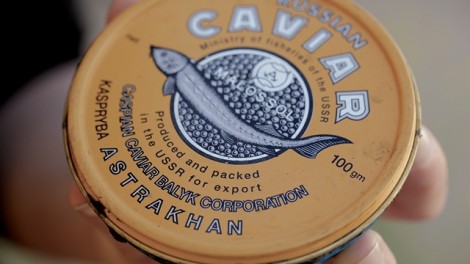 But poaching is not a matter of survival for him?

For him – no – because he has another job, but for the sturgeons – yes.

Is this problem limited to Astrakhan?

No, I have another story from Moscow. We had a different driver there who showed us photos from his holiday in the Caspian Sea and the sturgeons he had caught. On the photos, you could see him in a swimming suit holding a big Russian sturgeon and smaller sterlets. And he looked very proud of it. And we got many offers to buy caviar from wild sturgeons on the Moscow market too.

But there is a law in Russia that prohibits sturgeon fishing and it is a complete ban?

Yes. But poaching seems to happen at a far bigger rate than here because there are certainly more sturgeons there than in the Danube and Black Sea. There are estimates that 95% of the worldwide population of sturgeons lives in the Caspian Sea.

Are the species of sturgeon in the Caspian Sea different from the ones in the Danube?

The species are the same, but there are genetic differences because they have been separated for a long period of time. There is only one additional species in the Caspian Sea, but it is very similar to the Russian Sturgeon (Acipenser gueldenstaedtii). It is called Persian sturgeon (Acipenser persicus). 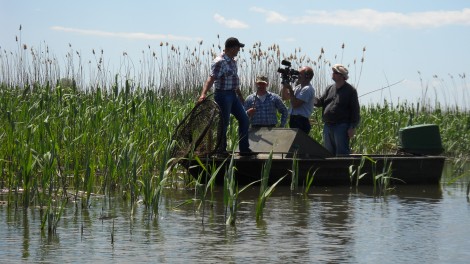 Are sturgeons in the Caspian Sea less threatened with extinction?

According to the IUCN Red List, they are in the same category. The sterlet is vulnerable and all other species are critically endangered. But I think that the situation in the Caspian Sea is worse when it comes to natural reproduction. The sturgeons there mostly come from aquaculture breeding and restocking.

Why is the breeding situation worse?

Because the destruction of sturgeon spawning habitats already happened in the 1950s. There was a big dam built in Volgograd, the former Stalingrad, and the Volga was the most important river for sturgeons. So due to the dam they lost the sturgeon habitats in the upper reaches of the Volga.

Besides poaching, do Caspian sturgeons face the same threats as Danube sturgeons?

I would say they are very similar: habitat loss, blocked migration, illegal trade in caviar and sturgeon meat. There are also increasing problems with water quality and quantity.

What is the local WWF office doing for sturgeon protection?

WWF Russia is very concerned about sturgeons, but it is very hard to get funding for projects. So at the moment, our colleague there, Alexander Moiseev, is doing sturgeon work on top of all other responsibilities that pay his salary. And he is great. I really appreciate his work. He is working with law enforcement agencies and he is pushing for caviar labelling in Russia because CITES labelling is not required for the domestic market. He is also working with aquaculture companies and trying to get their support to fight illegal trade. He also works to raise consumer awareness of the problem. The office made brochures and they are giving them away to shops.

What can we learn from the situation of sturgeons in Russia?

Well, at the Caspian Sea, the sturgeon species are almost the same and the problems are very much the same, but the situation of sturgeons is a lot worse. I think this shows that the simple fact that Romania and Bulgaria are EU countries forces them to have much stricter laws. For example, they have CITES labelling for caviar on the domestic market as well, and although poaching is happening here too, it is hidden more often. So obviously, it is more risky to get caught than in Russia. So even if we see that enforcement is not sufficient enough in the lower Danube region, it appears to be much more effective than in Russia.

What should EU consumers know about sturgeon caviar and meat coming from Russia?

If you are a tourist in Russia and buy caviar without CITES labelling and bring it to the EU, you are most certainly in trouble. The caviar gets confiscated and you will at least have to pay a fine. And chances are, you are also guilty of damaging sturgeon populations. 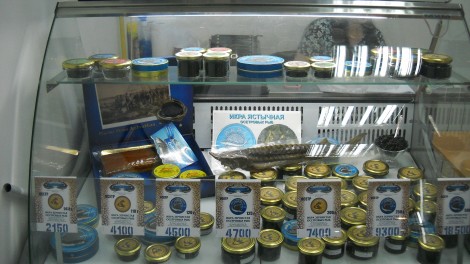 Are EU customs officers aware of the severity of the problem of poached sturgeon caviar and meat from Russia?

They are neglecting it, I think. They believe illegal caviar trade is no longer a problem because there are not many sturgeons in the wild anymore. But for the few sturgeons left, the problem is even more serious, and every poached sturgeon means a severe loss for the last wild populations.