The decline of Danube sturgeons is clearly documented by the rapidly decreasing catches.

Over the years, there has been no thorough monitoring of sturgeon populations in the Danube and their decline is hard to quantify. In general, assessing stock sizes of migrating fish in large water bodies is not easy. Danube sturgeons show a complex population structure with different life stages across the Danube River basin and the Black Sea.

However, the decline of Danube sturgeons is clearly documented by the rapidly decreasing catches. Already at the beginning of the 16th century, catches of Beluga sturgeon dropped in the Middle Danube, and in the 18th century fishing of migratory sturgeons in the Upper Danube was abandoned due to their scarcity. The Lower Danube continued to be the ultimate stronghold of sturgeons until the fast decline in the last decades. In Bulgaria, total annual catches fell from 63.5 t in the 1940s to 25.3 t in 1995-2002. In Romania they fell from 1,144 t in 1940 to less than 8 t in 1995. The reasons for the dramatic decline are complex, but lack of awareness and information is a  root cause of the most important one, overfishing. 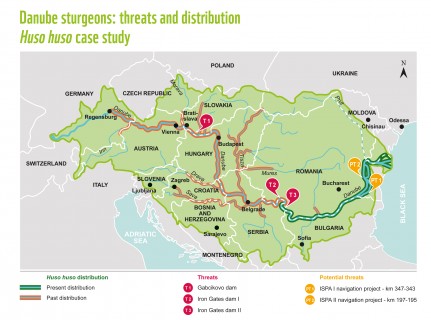