The Executive Agency for Fisheries and Aquaculture in Bulgaria introduced a new five-year ban on sturgeon fishing in the Bulgarian part of the Danube and the Black Sea.

It prohibits catching the four sturgeon species that are still found there – the Russian sturgeon (Acipenser gueldenstaedtii), the Sterlet (Acipenser ruthenus), the Stellate (Acipenser stellatus) and the Beluga (Huso huso).

Accidentally caught sturgeons have to be returned in the water immediately. Carrying, transporting and selling sturgeons and their products caught in the Bulgarian waters of the Danube and the Black sea is also prohibited, the text of the ban says.

The ban is practically an extension of the five-year ban on sturgeon fishing introduced in the country in 2011. A similar ban has been in place in Romania since 2006.

“This measure is undoubtedly necessary, but further serious, coordinated actions also need to be taken by the countries along the Lower Danube in order to successfully conserve the iconic fish”, said Vesselina Kavrakova, WWF Bulgaria Country Manager.

“Sturgeons reach sexual maturity relatively late. For the Beluga (Huso huso), which can live up to 100 years, this happens at the age of 14 to 18. This is why five or ten years are not enough to see the result of fishing bans”, Kavrakova said.

Limiting fishing is only one way to contribute to the recovery of sturgeon populations, Kavrakova says. Of key importance is the conservation and restoration of sturgeon habitats. In recent years, WWF Bulgaria experts have studied the status of sturgeons and their habitats in the Bulgarian section of the Danube River. Despite the months of fieldwork and the hundreds of thrown fish nets, the scientific data on sturgeons that has been gathered is still insufficient. “It is necessary to continue sturgeon studies because we can take effective measures to protect them only if we know more about the places where they breed,” said Kavrakova.

Restocking is another way to strengthen sturgeon populations. Over the past two years, WWF Bulgaria has resettled over 50,000 genetically pure Danube Sterlets into the river. But resettling such genetically pure individuals also needs to be performed by the governments of Lower Danube countries. 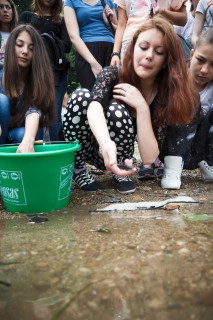 WWF Bulgaria will continue to work closely with the WWF offices in Romania, Serbia and Ukraine to protect the amazing Danube sturgeon. It is crucial to keep the Lower Danube (from the “Iron Gates” dam on the border between Serbia and Romania to the Danube Delta) in its natural state in order to give sturgeons and the other species inhabiting these waters a chance, said Kavrakova.